“Up! Up! and Away” in Caesarstone Quartz Countertops

Typically when you first hear the phrase “Up! Up! and Away!”, you think of the original television series Superman, or the song “Up! Up! and Away in my Beautiful Balloon!” written by Jimmy Webb and recorded by The 5th Dimension (I won’t mention the year). If you are from the newer generation, you might relate this saying to the Disney comedy/adventure movie of superheroes “Up, Up, and Away”. However you relate to this phrase, in this short story the phrase applies to the San Diego International Airport.

Before taking my seat in the airplane and heading “Up! Up! and Away!”, I had to experience the dreaded waiting time in the airport terminal.

First, I was already frustrated because the shuttle service I arranged online to pick me up at home was late. Then when I was dropped off at the airport, I left my carry-on bag in the shuttle van and frantically called their dispatcher and begged him to have his driver turn around and meet me curbside. 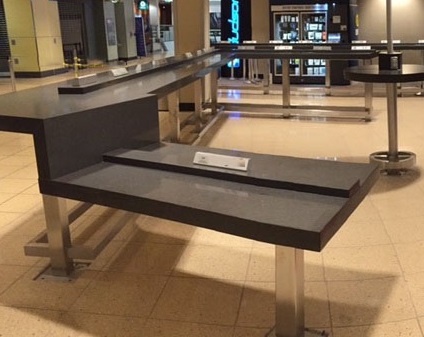 And if that wasn’t full of anxiety in itself, I broke my high heel struggling to lift my suitcase up on the scale next to the ticket counter when checking in. Ready to break down in tears, I reached for my cell phone to call for back-up, and discovered that I left my cell phone hooked up to the charger at home.

With carry-on in one hand and shoes in the other, I found an empty chair in a busy bar that faced out into the terminal. With one and one-half hours remaining for boarding, I indulged myself with a glass of wine, actually two. I pulled my laptop out of my bag to logon and saw my battery was dead. I’ll have a third please!!!

Drowning my sorrows and self-pity, I noticed how modernized the airport terminal looked since the last time I was here. Being a former interior designer, I couldn’t help to notice that Lindberg had the same Caesarstone Raven Quartz installed on their countertops that I just had installed in my kitchen by California Crafted Marble. The slate blended 2-tone grey with a slight flecked look, that added texture, was just as beautiful in the airport as it was in my kitchen. 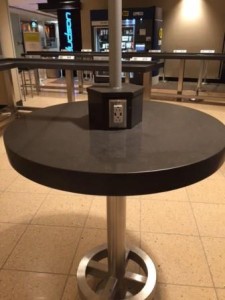 Then I saw it . . . through the tactile appearance there were computer hook-ups installed. I grabbed my bag and my shoes and rushed over and claimed one. Soon I was connected and was able to get a hold of my daughter to bring me a pair of replacement shoes, and my cell phone.

Though the day started out with hiccups, okay “disaster”, I owe my rescue to California Crafted Marble, Inc. for making it AFFORDABLE for me to purchase and have installed the same quartz countertop that was used for my residential home that was installed commercially at the airport.  Without the combination of the two, I would not have noticed the computer hook-ups.   Things work out in mysterious ways.

I recommend that you call the professionals at CALIFORNIA CRAFTED MARBLE, INC. at (619) 562-2605 to discover how “affordable” it is.   It may save you time and trouble.

The showroom is Open with COVID19 Visitor Restrictions: Click Here to Learn More